In this case of M&A transaction structuring, the Purchaser acquires a controlling stake in the target Company. 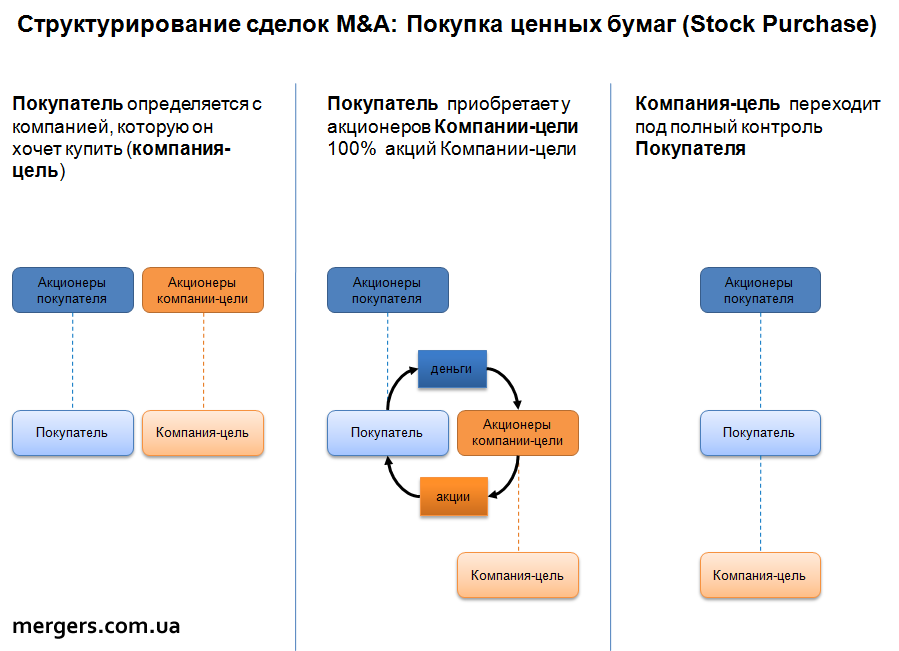 In this scheme of M&A transaction, the Purchaser determines the target Company, negotiates on the price of the purchase and acquires all assets and liabilities of the target Company, which from a legal point of view continues to operate as before, but as a subsidiary (controlled) company.

The advantages of the Stock Purchase scheme

The shareholders of the target Company receive real money for their share, which is always preferable to other forms of payment

The absorbed company maintains its corporate structure and operational activity

The contracts, labor agreements and other legal documents signed prior to acquisition are in full legal force

Licenses and permits owned by the company bought are, as a rule, retained by the Purchaser

The Purchaser reserves the right for tax assets (for example, the transfer of losses from previous years)

Allows you to avoid a number of problems with the tax laws, which can occur at the sale/purchase of real assets

Drawbacks of the Stock Purchase scheme

The Purchaser must collect the amount needed to buy the company

Lack of mutual interest between the buyer and the seller, as the shareholders of the target Company will get no financial benefit from the future success of the merged company

The appearance of the commitments prior unknown and not disclosed, which pass to the Purchaser