·         The NBU which is the central bank of Ukraine and the banking supervisory authority; and,

·         Ukrainian banks and branches of foreign banks duly established and operating in Ukraine.

As of Feb. 1, 2015, there were 155 banks holding banking licenses in Ukraine, including 50 banks with foreign capital. Nineteen banks were wholly owned by non-residents. The aggregate part of foreign capital in the share capital of Ukrainian banks constitutes 32.6 %. As of Mar. 5, 2015, 36 private banks were in the process of liquidation. In addition, temporary administration was introduced in a number of banks. 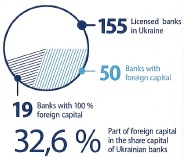 There are two state-owned banks. They are Public Joint Stock Company "State Savings Bank of Ukraine" (Oschadbank) and Joint Stock Company "The State Export-Import Bank of Ukraine" (Ukreximbank), both of which are wholly-owned by the State. Besides, several private banks were acquired by the State due to their recapitalization to support liquidity.

Ukrainian banking sector is strictly regulated by a large number of laws and regulations.

Main legal acts governing the banking sector in Ukraine include the following:

·         On the System of Guaranteeing the Deposits of Individuals

In Ukraine banks can exist in the form of a public joint-stock company or a cooperative bank. Ukrainian banks may open separate subdivisions (e.g., branches, outlets, representative offices) and have subsidiaries in Ukraine and, subject to the NBU's approval, establish or acquire subsidiaries, branches or representative offices abroad. Ukrainian banks may also form banking unions and associations.

Foreign banks may open their branches in Ukraine following the procedure prescribed by the NBU, although they generally prefer to enter Ukrainian market through acquisition of local subsidiaries.

The banks may choose certain specialization depending on the types of services provided (e.g., investment, mortgage, savings) or function as universal banks. Rules on obtaining of such status and the requirements with which such banks must comply are established by the NBU.

Minimum amount of a bank's share capital shall constitute not less than UAH 500 million (approx. EUR 20,180,710) as of the date of its state registration. However, for some specialized banks the NBU may establish higher thresholds.

Individuals and legal entities, either residents or non-residents, may be the shareholders of Ukrainian banks. The bank may be founded by a single shareholder. In addition, the CMU may establish state banks which are wholly-owned by the State.

Strict requirements are established for the holders of substantial participation in Ukrainian banks, which is a direct and/or indirect holding of 10 % or more of the bank's share capital or votes under the bank's shares or, irrespective of formal ownership, the ability to exert significant influence on the management or operation of the bank. The acquisition of 10 %, 25 %, 50 % or 75 % of the banks' authorized capital or votes under its shares, or other acquisition of substantial participation, is subject to prior examination and approval by the NBU.

In order to obtain the NBU's approval, the applicant must provide it with a large set of documents confirming, among other things, its adequate financial status, sufficiency of funds for such acquisition, impeccable business reputation, and ownership structure, etc. The NBU will consider the documents during a period of three months and decide whether to allow or prohibit such acquisition.

In addition, banks and holders of substantial participation in Ukrainian banks must comply with the following major regulatory and licensing requirements:

·             Banks may carry out banking activities in UAH based on the banking license issued by the NBU;

·             Banks may carry out operations in foreign currency based on the general currency license and in certain cases based on individual licenses issued by the NBU in accordance with the procedure envisaged by law;

·             Bank's senior managers must comply with a large number of requirements to their education, professional experience and business reputation. In particular, members of the supervisory and management boards must provide the NBU with documents confirming their professional experience and business reputation shortly after their appointment, while the bank's CEO and chief accountant may enter into office only upon the written consent of the NBU;

·             Banks must disclose their detailed ownership structure to the NBU and on their websites, and regularly update it;

·             Holders of substantial participation in Ukrainian banks must regularly notify the NBU on changes in their ownership structure previously disclosed to the NBU, etc.

Specific requirements also apply to banking groups and their members.

In March 2015 the Parliament has introduced new stricter rules on the bank's transactions with its related parties (e.g., controllers, holders of substantial participation, and senior managers, etc.) and their liability. Such persons may be subject to administrative liability (fines) for violation of the banking laws and regulations, including violations in reporting, risky transactions, etc. In addition, latest amendments to the Criminal Code provide for the criminal liability of the banks' related parties for deliberate actions leading to recognizing the bank insolvent.

Banks may deliver banking and financial services (except for insurance services) as well as carry out certain other activities set forth by law.

Based on the banking license banks may carry out banking activity by means of rendering banking services (which may be rendered by banks only):

1)    Attracting funds and banking metals as deposits from an unlimited circle of legal entities and individuals;

3)    Placing funds and banking metals attracted as deposits, including on current accounts, on its behalf, own conditions and at its own risk.

A bank may render other financial services to its clients, including by means of execution of agency agreements with other legal entities (commercial agents).

Apart from the financial services, a bank may also carry out the following activities:

6.    Maintaining registers of holders of registered securities (except for the bank’s own shares);

7.    Providing consulting and information services regarding banking and other financial services.

Notably, banks may commence performance of new types of activities or render new types of financial services (except for banking services) subject to compliance with the NBU's requirements as to the relevant type of activity or services and upon one month prior notice to the NBU.

To protect the banks' clients, the NBU may establish additional requirements for certain types of activities, including increasing the bank's regulatory capital or other economic ratios.

Banks are free to independently establish rates and commissions for their services.

A foreign legal entity qualifying as "foreign investor" under Ukrainian law may open local and foreign currency investment accounts with Ukrainian banks without opening a representative office in Ukraine. However, they may be used only for investing in Ukraine, repatriation of proceeds from such investment and some other related transactions.

Either foreign investors or representative offices of foreign legal entities may also open deposit accounts based on the deposit agreement with a Ukrainian bank.

Local and foreign currency accounts may also be opened for conducting joint business activity based on a contract between a foreign investor and a Ukrainian company, without the establishment of a legal entity.

It is expected that a number of reforms in the banking and financial sector aimed at its development and integration into the world capital markets will take place in Ukraine. According to the Coalition Agreement, these reforms include the following:

·             Developing regulations on the protection of creditors' rights based on international experience;

·             Approximation of Ukrainian legislation governing mergers and acquisitions in the financial sector to EU standards and practices;

The information contained herein is not a legal advice or clarification of the current legislation.